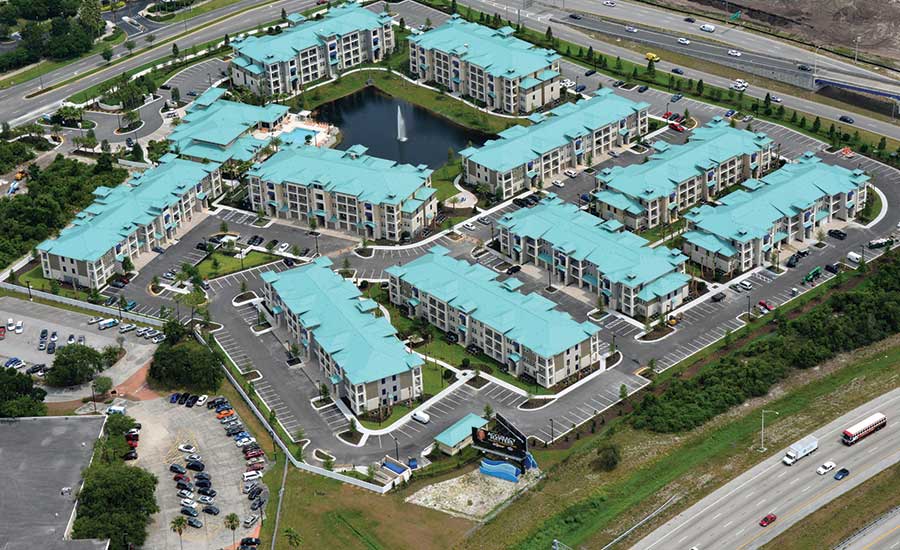 What do you do when you’re young, just finishing computer school and looking toward the future? Head to Silicon Valley? Interview with the computer department of local businesses? How about starting a roofing business? That wouldn’t make the list in most cases, but people make their way into the roofing industry from a world of different circumstances.

For Terry Dickerson, founder and owner of The Roof Depot, Inc., of Alpharetta, Ga., the end of his job search in the computer field marked the beginning of a remarkable career in the roofing industry.

It has been just over nineteen years since the journey began for Dickerson and Roof Depot. He worked with his brother while in computer school, nailing shingles in the afternoons until dark. As he moved from finishing school to interviewing for computer jobs, he worked as a repair tech for another roofing contractor and continued to find roofing work on his own. He found it satisfying and financially rewarding — so much that the search for a job in computers turned into a full-time occupation.

For the first six months Dickerson did all the work himself; setting all the appointments, doing the paperwork at night, and working on the roof during the day. It was at this point that he started hiring help and working to build Roof Depot into a viable enterprise.

Fast-forward to 2017, and Roof Depot has grown into a diversified roof-contracting operation with 2016 billings of $43 million and a plan to grow to $66 million in 2017. The team has grown to a staff of 126 employed associates backed up by a base of 150 to 200 subcontractors. Operating from locations in Georgia, Florida, and North Carolina, Roof Depot has performed work in 15 states and the U.S. Virgin Islands.

Roof Depot offers several different lines of commercial roofing systems and for residential new construction offers not only roofing, but siding and gutters. Metal roofing is offered and has grown to become a significant part of the overall portfolio. Commercial metal siding products are in development as well. Roof Depot operates several metal fabrication shops, a fleet of portable gutter machines, and a CNC-operated portable roll forming system for standing seam roofing panels.

While the infrastructure to produce this volume of work is essential, Dickerson is quick to point out that his business is built on relationships, including his team members, clients, vendors, and manufacturers. He learned over the years that even the best of relationships can encounter tough times, but his practice of not burning bridges has paid off in some unexpected ways.

One of those tough times came when a top developer suddenly and unexpectedly went belly up, leaving Dickerson with a small seven-figure deficit on a project. While the outstanding bill was high, labor had been paid up to date and the only thing remaining was a medium six-figure material bill. Dickerson went to his suppliers with a plan to pay them off in a specified timeframe — if they’d work with him and keep him supplied with other ongoing projects.

The suppliers backed his plan and he performed as promised. The relationship with those suppliers blossomed and continue to this day. Dickerson considers his suppliers valued partners in his business. He conducts a periodic performance review and the suppliers that provide the most value are rewarded with ongoing trade.

The relationship with his suppliers wasn’t the only thing that survived this otherwise disastrous project. Members of the developer’s leadership team went on to other pursuits and, one-by-one, brought more work back to Roof Depot. Some of them even ended up on the Roof Depot team and have been promoted into key executive positions.

Tough times tend to make roofing companies either stronger or non-existent. There have also been some good times for Roof Depot along the way. For example, in advance of the Great Recession, Roof Depot set out on a mission to take on more military work. They succeeded, and while most contractors in multi-family or track housing construction suffered greatly, Roof Depot’s billings only declined around eleven percent during the downturn.

Military work tends to add some new dimensions to roof contracting. For Roof Depot, it produced its largest project to date: a $2.5 million contract to reroof base housing at the U.S. Marine Corps Logistics Base at Camp Lejeune, in Jacksonville, N.C. On the other side of the coin, working at MacDill Air Force Base in Tampa, Fla. presented the added challenge of extremely difficult base access and logistics. That’s what happens when 27 generals from four branches of the military live in one place, officials said.

Over the years, Dickerson learned some lessons that continue to influence his management style. For instance, he learned from one manager how to not treat people, and that it can be very difficult to work for someone else. His management style is to be deferential and it shows through on something as simple as a walk through the halls of his office or the metal shop.

When the company was hitting its stride at the $9-11 million range, Dickerson was advised to slow the pace of growth or quality would suffer. He didn’t pay attention and later paid the consequences. He said he considers the advice of others very carefully and meets annually with his legal, accounting, bonding, and insurance professionals for a thorough business review. This is in addition to keeping an ear open to his senior leadership team and other associates.

Tricks of the Trade

Perhaps owing to his study of business and computer systems, Dickerson has built a sophisticated set of business systems to operate the company. With connectivity and communication between the operating groups of the company as the focus, Roof Depot works with custom software in addition to modified versions of packaged software to operate. The back-end system for keeping up with the numbers is called ComputerEase.

To connect with commercial service clients, Dickerson chose to build the Depot Shield® app on the FCS Control roofing software. The package is comprehensive as it offers a client portal while providing a place for full reporting internally. Depot Shield® is the brand Dickerson established to grow the commercial roofing service side of the business.

To stay in constant contact with the truck fleet, Roof Depot uses NexTraq, a GPS-enabled system that provides real-time and historical data of all vehicle movements. This is essential to manage a growing fleet of service vehicles.

For customer relationship management (CRM) software, Dickerson worked with a third-party developer to build a program specifically aimed at the unique needs of track home builders. This exclusive program was written on the Salesforce CRM platform.

Perhaps one of the most intriguing uses of digital technology employed by Roof Depot is their bar-coding system for managing tool and equipment assets. Small equipment and tools are kept in a separately secured area of the warehouse and are managed by a limited number of individuals who are responsible for keeping up with the entire tool and equipment inventory. A high level of control is achievable with a minimum amount of work.

Beginning around 2014, Dickerson began to wonder what would be next. The company was doing well; work was steady and profitable. Should he just keep going on business as usual, or take it to the next level? His decision was to take it to the next level, but what does that mean? Today, Roof Depot is working to answer that question in all forms, but the primary mission is starting the process to long-term, sustainable growth.

Dickerson has been working with his team of professionals and senior leadership on a message that includes a new and dynamic vision and mission for Roof Depot. Starting from where the enterprise is today, they’ve developed the message and are in the process of delivering it to the entire team. At the same time, Dickerson is working to build the rest of the leadership team that’ll take the company to the next level. That next level includes, among other things, driving the size of the company to become one of the top ten roof contracting firms in the nation.

The good news and the challenge for Roof Depot associates is the great growth opportunities available to them all. The growth is planned to come from people and product groups. This will require more separation of the various types of work and an expanded leadership team. It will require a dedication to training on all levels. To this end, Roof Depot is already working its plan.

Training for associates has been a part of the Roof Depot culture for years, but it doesn’t stop there. They offer training on specific roofing skills to subcontractors and clients as well. They even take their training tools, which include a portable mockup of several roof types, on the road to train technical school teachers. Roofing Contractor was recently invited to join a team of Roof Depot pros who presented a multi-faceted seminar on roofing for members of the Trade and Industrial Educators of Georgia (see page 32).

Also, building his team at the top, Dickerson recently enrolled Heath, who was the first vice-president in the company’s history, in the Future Executives Institute (FEI), a program of the National Roofing Contractors Association (NRCA). Courses are taught at Northwestern University’s Kellogg School of Management in Chicago and are taught by Northwestern University professors, industry leaders and field experts. FEI is a three-year course on management theory and practice to develop participants’ leadership and communications skills. This is coupled with a unique roofing-industry networking opportunity as participants come from all types of roofing companies all over the country.

One major component of the Roof Depot plan for sustainable growth is to separate the Georgia branch from the corporate headquarters. Dickerson prefers to avoid the “corporate” term, in favor naming it the National Support Center (NSC). This will enable the executive leadership to focus on supporting all the branch operations as it continues building the kind of infrastructure that will be required to operate a top-ten roof contracting company.

There isn’t enough room here to outline Dickerson’s comprehensive plan for sustainable growth. It’s important to note, however, that the plan is in place with flexible goals and inflexible core values. These core values include leadership, character, integrity, and safety. Dickerson has defined these values and puts them forward to his team continuously.

Beyond building a sustainable, top-ten roof contracting business and building a new building for their NSC, Roof Depot’s stated goals include changing the lives of the entire team for the better, maintaining an excellent safety record, and having fun together. Some of these goals are easy enough to measure, and some are a bit more subjective. Asked how he defines success, Dickerson said “Success is finding happiness. Watching people succeed … finding their happiness — is finding mine.”